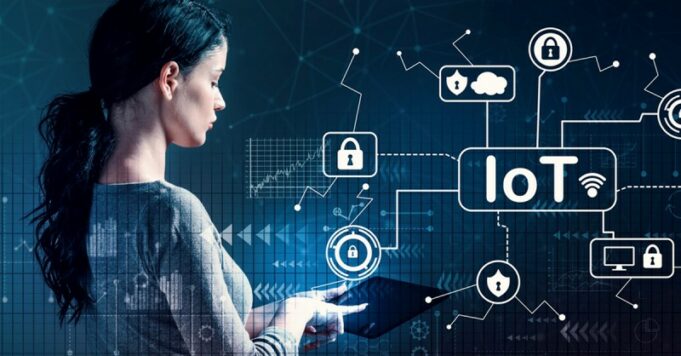 Internet of Things (IoT) is a network of things, machines, and gadgets that can send data over a network without any help from a person. An automobile with sensors inside that alert the driver when the tyre pressure is low is an example of an IoT system. It may be a biochip transponder implanted in a farm animal.

It could also be a heart monitor that is implanted or anything else that sends data over a network using an IP address. IoT is used by businesses to improve customer service, make better decisions, increase the value of their company, and run more efficiently. The Internet of Things (IoT) is expanding quickly.

There may be up to 26 billion devices connected to it by 2025. IoT technology could be very helpful to the transportation, healthcare, manufacturing, business, and consumer sectors. But as more devices are added, linked networks will become increasingly open to hackers if issues with IoT security aren’t solved. Here are the risks and problems that come with the Internet of Things, as well as ways to protect your business.

IoT Security Issues And Responses In 2022

The IoT places a lot of emphasis on the requirement that these devices have trustworthy security mechanisms. We will discuss the top Internet of Things security issues that are endangering these systems globally right now. and how to resolve issues using appropriate techniques or strategies.

We will walk you through the five biggest IoT security concerns and problems that you or your business may face.

Even though it sounds crazy, many people who are in charge of setting up Internet of Things devices forget to change the default login information and passwords. Because so many people still use default passwords, their Internet of Things (IoT) networks and devices are very vulnerable. Most of the time, weak or default passwords are at the top of the list of IoT security problems. Hackers use pre-set passwords and “brute force” to get into IoT devices, which gives them access to all the other devices on the network.

Even though huge networks of IoT devices are being set up, security compatibility between IoT devices is not getting the attention it needs. On a single network, you may find hundreds to thousands of Internet of Things devices in industries like retail, healthcare, mining, and shipping. Various businesses that produce these devices have different security and firmware requirements. These intricate networks frequently contain legacy hardware, which becomes the primary source of IoT security issues. In order to attack the network, hackers search for these devices.

IoT software that is out of date

The entire network might be at risk from outdated firmware, faulty updates, insecure update distribution, and legacy operating systems. This makes it much harder to protect IoT devices, which are often the next target of large-scale attacks. The cost of using hardware and software from third parties in supply chains is significant for many firms. Unsafe software components and libraries that are no longer used can put the device connected to the network and the network itself at risk. And to make things worse, there aren’t any consistent firmware upgrades or security fixes.

Data is the new oil, and having access to it is profitable. Networks are continuously under assault by hackers looking for vulnerabilities, just like a nasty neighbour could fire shells across the border. When data is mismanaged and has little to no security, hackers and other groups are drawn to it and exploit it to their advantage by making it public, demanding a ransom, or even stealing it. IoT security challenges and IoT ransomware attacks are becoming more common. According to recent studies, more than 95% of the data sent between IoT devices is not secure. This leaves enormous quantities of data exposed, where a malicious invader may take them.

The most important part of an IoT network for a business is how devices are approved and verified. Since every device has the potential to be an access point, it is important to make sure that all devices that connect to the network are allowed and validated according to the rules. According to recent studies, 20% of IoT devices connected to these networks are unauthorised. Even tech giants like Tesla have had trouble with unauthenticated devices getting into company networks. In terms of security breaches, this is a pretty common problem with IoT in the healthcare industry. More fake gadgets are on the market, and their operating systems are often changed to make them easier to hack.

Solutions To Avoid Or Solve Such Issues

The solutions, or safeguards, that you should use to protect your IoT devices from hackers and breaches are listed below.

Change the password on your IoT device as soon as you get it, even before you connect it to the internet. Avoid using basic phrases and try to use a strong, complex password. Hackers use software that can decode hash keys and hash keys for commonly used passwords. It is strongly advised to use one IP address for all logins. People in various locations find it extremely difficult to connect as a result.

To deal with security and privacy issues in the industrial internet of things, businesses should hire an Operation Technology Manager (OT Manager) who knows how to manage networks. Either remove aged hardware from the network or upgrade its security firmware to match that of newer hardware. Businesses should segment the network and control it on a micro level. All IoT devices and their networks should go through regular and ongoing security checks to look for security flaws, firmware updates, warnings, and reports.

IoT software that is out of date

Any hardware or software from a third party that will be used in the supply chain should be carefully checked by security experts. Always use secure, encrypted methods to carry out regular updates and secure update techniques. Before they are sent to the Internet of Things device network, updates should be checked for their source and reliability. Financial IoT security problems could be fixed if banks updated the operating systems of the devices in a safe way.

Users can use cryptography to secure their data since it is the best approach to keep their data secret. Large companies should use strong data encryption like 256-Bit encryption to protect the privacy and security of their data. Federated Machine Learning (FML) can help you and your business solve or stay away from problems like these.

Authentication and authorization are not secure.

Enable two-factor authentication so that when you log in, your account will give you a confirmation message through text message or mail. Businesses may add more biometric authentication to their server rooms to increase security. Use passwords that are safe and have at least eight characters, including numbers and special characters. Privileged Access Management (PAM) is a key part of making IoT security less dangerous and harder.

Challenges And Solutions For IoT Security

Users, systems, devices, and networks are in danger when Internet of Things devices aren’t secure. IoT security, however, involves more than simply a company’s setup things. To make the IoT secure, users and administrators should collaborate to develop a security culture. This requires users to do things like prevent unnecessary remote access and update the system-provided security passwords. You should be ready for the future after reading this guide’s discussion of IoT security issues and potential solutions. Please share your opinions on this article in the comments area below.